2022 is Scotland’s Year of Stories, and to celebrate the Scottish Dolphin Centre is collecting stories about Spey Bay from WDC volunteers, the local community and our visitors. Stories should be 150-300 words long, or could be in another form such as poetry, video, music, or anything creative! Submissions can be sent by email to [email protected] or by post to Scottish Dolphin Centre, Spey Bay, Moray, IV32 7PJ.

Here we feature our first #SpeyBayStory, sent in by one of WDC’s Shorewatch volunteers, Sue Pianta-Scott. We love this fantastic poem and how it encapsulates the wonderful variety of wildlife here.

So, there I was standing in front of the oldest Ice House in Scotland, 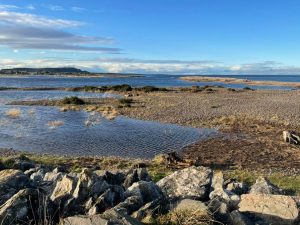 Gazing out across the largest shingle beach in this beautiful country .

And watching as the fastest flowing river Spey was going into the sea.

When, something caught my eye!  What was that movement in the waves?

Ooohs and aaahs from those watching, such a sight cannot be seen in silence!

They never fail to delight.

Then there are the gannets putting on a show of diving , sometimes as many as ten to fifteen all diving at the same time, their wings folded as they go deep in the water to catch fish.

Once April is here, the lookout is on for the Osprey, what a magnificent bird.

If you’re really lucky, you might see one flying back to its nest with a fish in its claws.  The fish always facing the right way.

Then there are the mountains, behind you and across the Moray Firth to the North.  In the winter the snow settles on them and with the sun, they look spectacular.

I moved here from the South East of England  ( my partner to come home to his roots) , to this wonderful corner of the world and never a day goes by that I don’t look out from my window and think:

Wow! This really is the place to be.

There are no upcoming events.